What is a data union?

But you don't have the tools to measure those data points precisely and monetize them like Big Tech companies do.

Your data isn't that valuable (sorry). But if you pool your data with enough people, you have something that's worthwhile. That's the basic idea behind data unions and data cooperatives.

Just like a credit union or a food coop, it's possible for the people generating the value of the data economy to benefit directly and control what happens to their private information. A large community can sell their data directly to advertisers, researchers, and data companies. 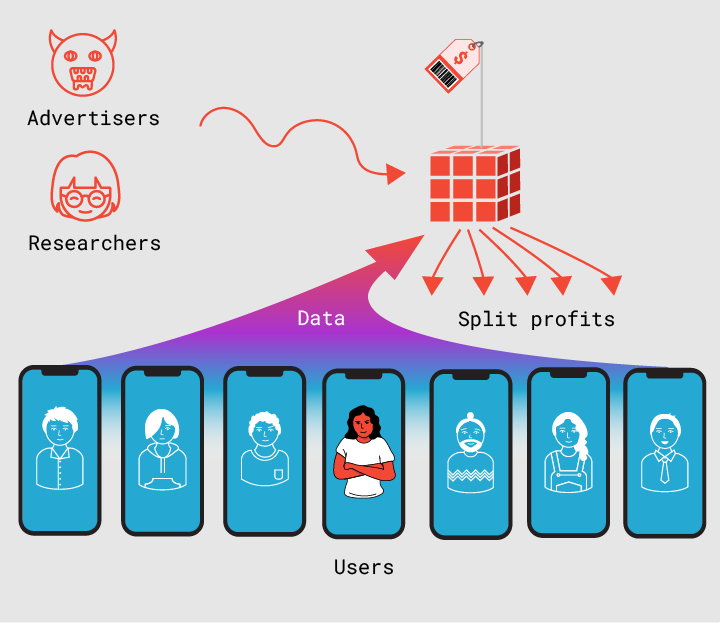 Then the profits can be split among members in regular micropayments. Imagine getting paid to browse the web or drive to work. Someone is already making money off that data, so shouldn't you be getting paid?

One challenge to this potential future is that traditional banks make it expensive to pay thousands of people very small amounts. But with blockchain systems, the same network of users that is generating data can also host a distributed ledger that can make micropayments a reality.

Ugh, did you say blockchain??

Traditional banks act as a trusted third party when people are paying each other. Blockchain is a ledger of such transactions that isn't held in a bank, but distributed among many individuals who all maintain an up-to-date record of transactions with cryptocurrencies like Bitcoin, Ethereum, or newer currencies like Basic Attention Tokens or DATA tokens that are attempts to realize the possibilities of data unions.

Isn't cryptocurrency awful for the environment?

Yes — building a new block in the chain of ledger instances requires a ton of computing power, and the longer the chain gets the more computing is necessary to build another block. But there are plans for more energy-efficient systems, and it's worth considering that the four biggest banks — Chase, Wells Fargo, Citi, and Bank of America — have invested $2.6 trillion in fossil fuel since the Paris Agreement.

Could we just make data into free public goods?

That's a Data Commons. Some data should be available to anyone — like Wikipedia, OpenStreet Maps, or certain government information. This is another element of a more moral future for data economics. A browser extension that aggregates browsing data from 22,000 users into a data union and sells it advertisers and other buyers.

Install a browser extension and get paid to visit websites as usual. An open-source framework for collecting and monetizing data streams from users, including marketplace.

Collect data from your app or project and sell it on a marketplace; if the data was generated by a group of people, you can even split the earnings and form a data union! A cryptocurrency earned by viewing ads on the web, built into the Brave web browser.

Instead of big tech platforms selling your attention and data to advertisers, you control what data to sell or share and you get paid. A worker-owned internet service provider in New York City, founded by former workers from Spectrum after a strike.

Buy cheap high-speed internet and you become an owner of the cooperative with a say in data privacy and operations. A non-commercial data cooperative designed to give members control of their health records, while working with medical researchers to accelerate new research.

You are in control of your health records, easily choosing what to share with providers or researchers. Pay as you listen and foster a collaborative and close-knit relationship with artists, while owning your own data. Comprehensive suite of work apps based on a community-owned model. A cooperative of drivers working in the gig economy, using an app to collect and analyze driving data for mutual benefit

Use location and data tools previously available only to big tech to organize workers in your community.

Our data could be

Want to contribute to a unique dataset?: